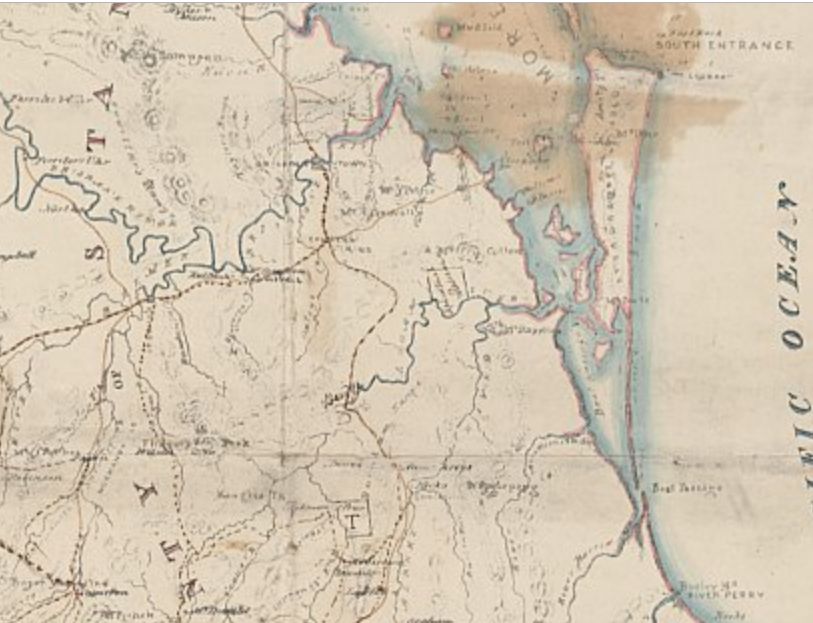 In 1840, Robert Dixon surveyed and published a map of the NSW County of Stanley that in 1859 was to become the State of Queensland. It included three rivers in the south east: River Arrowsmith, River Barrow, and River Perry. Sir Thomas Mitchell the New South Wales Surveyor-General renamed them Coomera River, Nerang River and Tallebudgera Creek before his death in 1855 in keeping with his strong preference for retaining local Aboriginal place names.

If you look closely at the River Barrow (Nerang) on the right, the Little Tallebudgera Creek runs into it at Broadbeach from the south, then the river veers north, runs past Surfers Paradise and enters the Pacific Ocean just after Main Beach. About the year 1850, Ned Harper came to the Nerang River valley as one of its first settlers, harvesting cedar. After living with the local Kombumerri Aborigines he settled on the banks of Little Tallebudgera Creek and built a wharf at the place where Jupiters Casino Broadbeach is now situated. When he died in 1896, aged seventy, he was buried on a rise nearby.

In 1840 the Nerang River's mouth was thus located much further south, near Main Beach, but in 1930 its mouth was located where Sea World now is. The main driving force for this movement was the northward drift of sand after 1897-1898, about 60 metres per year, while South Stradbroke was being steadily eroded from the south.

From about 1868, Pimpama, 28 kms north of the Nerang River's mouth, was the terminus of Cobb & Co Coach services that delivered mail and passengers to and from Brisbane, with the route extended in 1871, to the Township of Nerang, 12 kms west of its mouth. Since 1869, a weekly horse mail service had been running via the Currumbin Creek Valley from Nerang to Kynnumboon, 6kms north of Murwillumbah over the NSW border. It was called "Bray's track" — today the Tomewin Road — with Joshua Bray the first postmaster in Kynnumboon spoken of as "King of the Tweed" at his obituary in 1918.

Southport is the Gold Coast's Central Business District (CBD) and has played a pivotal role on the Gold Coast and in South East Queensland for more than a century. It was one of the first coastal resort towns in the region, later becoming the administrative and commercial centre of the Gold Coast.

Goo-een is the Aboriginal word for Southport. As early as 1860 a village reserve was proposed opposite the Boat Passage but it would be some time before this village was surveyed.

The first white settler in Southport was Richard Gardiner in 1869, when Southport was referred to as crown reserve at the "Nerang Creek Heads". Richard Gardiner built a home and a wharf near the river end of Queen Street and the Loder Family established a farm beside a salt water creek to the south of this reserve. Many selectors also took up farming properties which would later be included in the town.

George Pratten received the commission to survey it as a Township in 1874, naming it Southport in 1875 on account of its position as the most southern possible port of the Queensland Colony, also acknowledging the English seaside resort of the same name.

Sale of land was slow, in some ways, but news of the excellent fishing and accounts of Southport's potential as an idyllic seaside resort spread to the Brisbane community. An increase in visitors motivated land sales and the construction of holiday accommodation. The main means of contact with Brisbane in these early days was by cutter or steamer. On arrival in the Broadwater, a small boat would row into shore to deliver passengers or supplies. Around 1880, the Southport jetty (later known as the Pier) was built. The local people gathered donations from the community to build it.

1883: Jetty extended to a length of 800 feet. Steamers such as the Natone or the President providing a regular service to Brisbane docked at the pier and visitors could easily walk to the shoreline. That same year, Southport was formed as a separate Division by the state government from parts of Nerang and Coomera Divisions, while Coolangatta became Qld's border-township. Note, in 1903, all Divisions in Queensland were renamed as Shires.

In 1890, Southport became the favoured seaside destination for the Queensland Governor, Sir Anthony Musgrave and his entourage. The Southport Divisional Board encouraged tree planting, various sideshow amusements, the construction of the Southport Pier and picture theatre. Swimming baths were built, and a kiosk erected. The pier and nearby kiosk and park were enjoyed by weekend railway excursionists, who could promenade upon the jetty or listen to the town band playing or check the catch of a local fisherman. Southport became a fashionable seaside resort.

Pacific Highway and Motorway. This inland road though would be 82 years before finally arriving. Until then the Pacific Highway was in fact the coast road, with a ferry initially transporting cars over the Nerang River to Main Beach up until 1925. In 1914, Coolangatta was named a Town. In 1918, Southport changed from Shire to Town.

The stretch of foreshore opposite Southport was appreciated for its surf, but not hugely popular. Main Beach itself remained mostly undeveloped, even in the 1940s there were only just six houses built. Cars could bypass Southport and Main Beach however by taking the Nerang-Broadbeach Road.

The area's rebranding as a national and international tourist resort began when hotelier Jim Cavill opened his Surfers Paradise Hotel in 1925 in a suburb of Southport then known as Elston. The same year, the new Jubilee Bridge replaced the old ferry, making Elston attractive to motoring tourists and Brisbane day-trippers. The coast road, called the Pacific Highway, now ran all the way to Tweed Heads.

In 1933, the suburb was renamed Surfers Paradise, and despite some initial resistance, the name came to define a positive new image for the south coast.

Click here for Coolangatta Airport, started by the Federal Government in 1936 as emergency grassy strips on the Sydney-Brisbane mail run. Sealed in 1958.

In 1949, the name Southport Town Council was changed to South Coast Town Council that incorporated the Town of Coolangatta as well as Burleigh Heads previously part of Nerang Shire.

In 1958, South Coast Town Council changed its name to Gold Coast Town Council, then in 1959 Gold Coast City Council. The name had been originally used as an ironic nickname by the Brisbane , reflecting on the price involved in a land auction in Surfers Paradise. While not everyone appreciated the irony, the name stuck.

In 1966, the area gained a considerable facelift when the Jubilee Bridge was replaced by the Sundale Bridge followed by the in 1968.

Click here for a history of other Gold Coast Beaches.

Click here for a map of Gold Coast Beaches and Suburbs and current Populations.

The southernmost tip of the island was reclaimed to form the north side of the Gold Coast Seaway in 1986.

The first sawmill in South East Queensland was built at Pimpama in 1863 by Jesse Daniells. From about 1868 Pimpama was the terminus of Cobb & Co Coach services from Brisbane. The route was extended to Southport Division in 1882.

In the 1860s, farmers along the Pimpama River experimented firstly with cotton growing, then with sugar, both of which initially were dependent on South Pacific Islands labour. By December 1876 the main Pimpama sugar plantations (Ormeau, Malungmavel, Pimpama and Yahwulpah) had ceased production, and were devoted either to cattle or arrowroot, but some smaller farms in the district continued with sugar growing for several decades. However, arrowroot cultivation had been an early crop grown widely in the area. Arrowroot gave about the same return as maize or potatoes, but was more frost, drought and flood resistant. It was very popular in the Victorian era, and Napoleon supposedly said the reason for the British love of arrowroot was to support the commerce of their colonies. It can be consumed in the form of biscuits, puddings, jellies, cakes, hot sauces, and also with beef tea, milk or veal broth.

The first commercial arrowroot in Pimpama was grown in the late 1860s, and the Lahey family, who moved to Pimpama in 1870 and eventually took up Sunnyside, adjoining William Doherty on Hotham Creek (see this man below) went into arrowroot cultivation on a large scale, inventing a mechanical processing method which revolutionised the production of arrowroot, and marketing arrowroot under their own brand.

Then in 1884 came Doherty's Arrowroot Factory

Irish-born settlers William Doherty and his wife Eliza Fannon had arrived in Queensland by September 1867. It appears that they were Residents in Brisbane until November 1869 at least, but had moved to the Pimpama district by August 1870 where he petitioned with others for a local school. Pimpama State School was built in 1872. It is not known where in Pimpama the Doherty family lived at this period, but William Doherty worked on a number of local sugar plantations and farms before taking up his own selections in the mid-1870s. In October 1874, Doherty selected 158 acres of second class pastoral land on Hotham Creek, on which Laurel Hill Farmhouse was later built. He raised cattle and grew various crops, purchasing more and more lots.

By 1884 Doherty had between 40 and 50 acres under arrowroot, and erected his own factory in the first half of the year. Remnants of this mill survive. Before the turn of the century, he purchased Pimpama Plantation at Ormeau, approximately 1,150 acres which he used for grazing purposes, and c.1901 acquired Sunnyside, the Lahey family's substantial arrowroot plantation adjacent to Laurel Hill on Hotham Creek.

The Doherty family were prominent members of the local community, involved in church and civic affairs. William Doherty was a trustee of Pimpama School of Arts and served as a councillor on Coomera Divisional Board from c.1887 to c.1889. His son Thomas later became chairman of Coomera Shire.

Following William Doherty's death in 1904, the properties were divided between his three sons: Laurel Hill went to William Alexander (Alex), Sunnyside which was renamed Willowvale by the Dohertys went to Thomas, and Pimpama to Robert. The Willowvale arrowroot mill was moved further downstream on Hotham Creek, closer to the Pacific Highway at Pimpama, and continued production until the mid-1930s.

By 1908, Queensland farmers on about a dozen farms in the Yatala, Pimpama, Ormeau and Nerang districts, were supplying almost the whole of the arrowroot used in Australia.

Alex Doherty at Laurel Hill turned to dairying in the early 1920s before retiring to the Gold Coast c.1947. Subsequently, the property was purchased by the Miles family of Pimpama, with title to Laurel Hill transferred in 1950. Members of this family resided in the house until mid-October 1997.

From 1930 onwards there was a move by many toward dairy farming in the Pimpama/Willow Vale region. More recently these farms were used for fattening cattle.

In the 1960s small lines were being closed across the state, with the Queensland Government arguing they were losing money and cars were the way of the future.

To quote former Gold Coast Mayor Lex Bell "The carriages were wooden, they were sort of a dark brown most of them, and the air-conditioning was simply, opening the window," he said. "One had to be very careful when opening the window because cinders could get in and get in the eyes." Mr Bell said the trains were not as fast or efficient as today's models are. "It was a winding line and it therefore had to be navigated very carefully by the train drivers at the time."

In 1996, a new Electric Light Rail Service was opened from Brisbane to Helensvale, extending to Varsity Lakes in 2009.